Analysts expect that Caesars Entertainment, Inc. (NASDAQ:CZR) will post $2.63 billion in sales for the current quarter, according to Zacks Investment Research. Seven analysts have made estimates for Caesars Entertainment’s earnings, with the lowest sales estimate coming in at $2.52 billion and the highest estimate coming in at $2.73 billion. Caesars Entertainment reported sales of $1.50 billion during the same quarter last year, which suggests a positive year-over-year growth rate of 75.3%. The company is scheduled to report its next quarterly earnings results after the market closes on Tuesday, February 22nd.

According to Zacks, analysts expect that Caesars Entertainment will report full-year sales of $9.78 billion for the current year, with estimates ranging from $9.53 billion to $9.96 billion. For the next year, analysts expect that the company will report sales of $11.11 billion, with estimates ranging from $10.58 billion to $11.53 billion. Zacks Investment Research’s sales averages are a mean average based on a survey of analysts that that provide coverage for Caesars Entertainment.

Caesars Entertainment (NASDAQ:CZR) last posted its earnings results on Tuesday, November 2nd. The company reported ($1.08) EPS for the quarter, missing the Zacks’ consensus estimate of $0.08 by ($1.16). Caesars Entertainment had a negative net margin of 13.60% and a negative return on equity of 21.28%. The company had revenue of $2.69 billion during the quarter, compared to analyst estimates of $2.66 billion. During the same period in the previous year, the company earned ($6.09) EPS.

In other Caesars Entertainment news, insider Edmund L. Quatmann, Jr. sold 5,279 shares of the stock in a transaction that occurred on Tuesday, January 4th. The shares were sold at an average price of $89.60, for a total value of $472,998.40. The sale was disclosed in a document filed with the SEC, which is available through this link. Corporate insiders own 0.55% of the company’s stock.

Caesars Holdings, Inc is a holding company, which engages in the provision of casino-entertainment and hospitality services. It operates through the following segments: Las Vegas, Other U.S., and All Other. The All Other segment includes managed and international properties as well as other business, such as Caesars Interactive Entertainment. 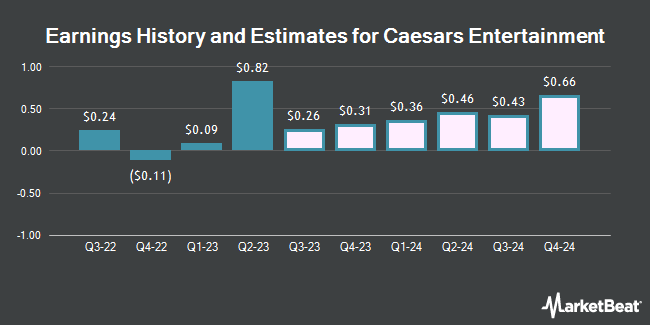 $51.43 Million in Sales Expected for DHT Holdings, Inc. This Quarter

Complete the form below to receive the latest headlines and analysts' recommendations for Caesars Entertainment with our free daily email newsletter: