LiveRamp Holdings, Inc. (NYSE:RAMP) has been given a consensus recommendation of “Buy” by the twelve analysts that are presently covering the stock, MarketBeat.com reports. One investment analyst has rated the stock with a sell recommendation, one has assigned a hold recommendation and nine have given a buy recommendation to the company. The average twelve-month target price among analysts that have issued ratings on the stock in the last year is $82.10.

In other LiveRamp news, insider James F. Arra sold 9,500 shares of the stock in a transaction on Monday, February 1st. The shares were sold at an average price of $76.57, for a total transaction of $727,415.00. Following the transaction, the insider now directly owns 132,532 shares of the company’s stock, valued at $10,147,975.24. The transaction was disclosed in a document filed with the Securities & Exchange Commission, which is available at this link. Corporate insiders own 5.29% of the company’s stock.

LiveRamp (NYSE:RAMP) last announced its quarterly earnings data on Sunday, February 7th. The company reported $0.14 EPS for the quarter, beating analysts’ consensus estimates of $0.07 by $0.07. The company had revenue of $120.00 million during the quarter, compared to the consensus estimate of $113.10 million. LiveRamp had a negative return on equity of 7.60% and a negative net margin of 21.33%. The company’s quarterly revenue was up 17.6% compared to the same quarter last year. During the same quarter in the prior year, the firm earned ($0.03) EPS. As a group, research analysts forecast that LiveRamp will post -1.48 earnings per share for the current fiscal year.

Recommended Story: How Do You Calculate Return on Investment (ROI)? 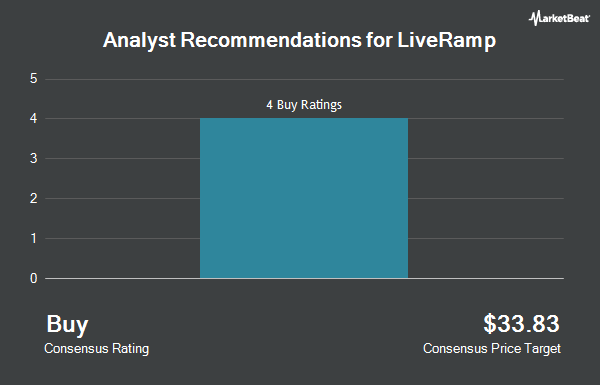 Receive News & Ratings for LiveRamp Daily - Enter your email address below to receive a concise daily summary of the latest news and analysts' ratings for LiveRamp and related companies with MarketBeat.com's FREE daily email newsletter.

Complete the form below to receive the latest headlines and analysts' recommendations for LiveRamp with our free daily email newsletter: