Shares of Kansas City Southern (NYSE:KSU) have earned a consensus rating of “Hold” from the sixteen research firms that are covering the stock, MarketBeat Ratings reports. One equities research analyst has rated the stock with a sell recommendation, seven have given a hold recommendation and six have issued a buy recommendation on the company. The average 1-year price objective among brokerages that have updated their coverage on the stock in the last year is $270.85.

Kansas City Southern (NYSE:KSU) last issued its quarterly earnings data on Thursday, July 15th. The transportation company reported $2.06 earnings per share (EPS) for the quarter, missing the consensus estimate of $2.15 by ($0.09). Kansas City Southern had a return on equity of 16.17% and a net margin of 4.63%. The firm had revenue of $749.50 million for the quarter, compared to analysts’ expectations of $749.06 million. During the same period in the previous year, the business posted $1.16 EPS. The business’s revenue for the quarter was up 36.8% compared to the same quarter last year. On average, research analysts expect that Kansas City Southern will post 8.84 earnings per share for the current fiscal year.

The company also recently disclosed a quarterly dividend, which will be paid on Wednesday, October 6th. Investors of record on Monday, September 13th will be paid a $0.54 dividend. This represents a $2.16 annualized dividend and a yield of 0.79%. The ex-dividend date is Friday, September 10th. Kansas City Southern’s payout ratio is currently 31.03%.

Kansas City Southern is a transportation holding company. It focuses on the growing north or south freight corridor connecting key commercial and industrial markets in the central United States with major industrial cities in Mexico. The firm also engages in the freight rail transportation business operating through a single coordinated rail network.

Featured Article: What does an equal weight rating mean? 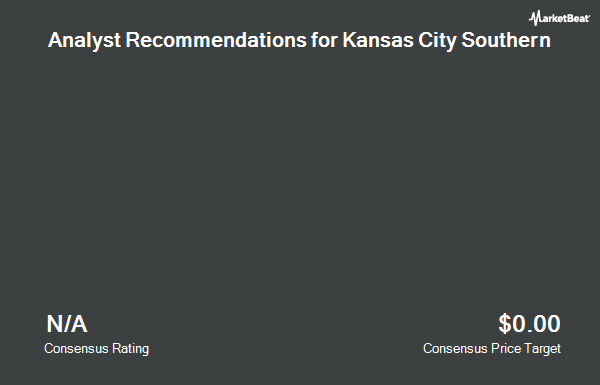 Complete the form below to receive the latest headlines and analysts' recommendations for Kansas City Southern with our free daily email newsletter: