Axxcess Wealth Management LLC raised its position in Prospect Capital Co. (NASDAQ:PSEC – Get Rating) by 16.7% during the second quarter, according to the company in its most recent 13F filing with the Securities and Exchange Commission (SEC). The firm owned 58,089 shares of the financial services provider’s stock after purchasing an additional 8,308 shares during the quarter. Axxcess Wealth Management LLC’s holdings in Prospect Capital were worth $406,000 at the end of the most recent quarter.

Prospect Capital (NASDAQ:PSEC – Get Rating) last issued its quarterly earnings data on Monday, August 29th. The financial services provider reported $0.21 earnings per share for the quarter, beating analysts’ consensus estimates of $0.19 by $0.02. Prospect Capital had a return on equity of 9.50% and a net margin of 36.40%. The firm had revenue of $184.62 million during the quarter, compared to analyst estimates of $179.74 million. During the same quarter last year, the firm earned $0.17 EPS. Sell-side analysts expect that Prospect Capital Co. will post 0.96 earnings per share for the current fiscal year.

The company also recently announced a monthly dividend, which will be paid on Thursday, February 16th. Stockholders of record on Friday, January 27th will be given a $0.06 dividend. The ex-dividend date is Thursday, January 26th. This represents a $0.72 annualized dividend and a dividend yield of 9.24%. Prospect Capital’s payout ratio is 112.50%. 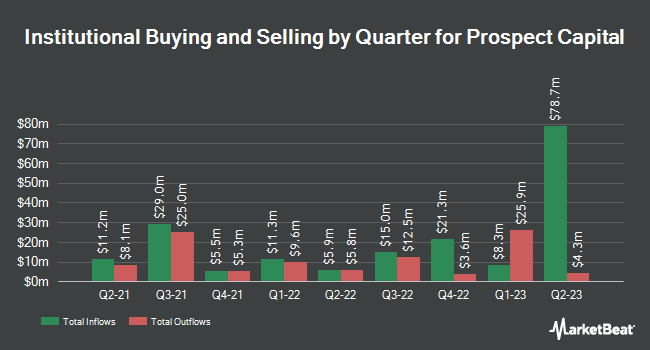 Complete the form below to receive the latest headlines and analysts' recommendations for Prospect Capital with our free daily email newsletter: