APA (NASDAQ:APA) will announce its earnings results after the market closes on Wednesday, May 5th. Analysts expect the company to announce earnings of $0.28 per share for the quarter. Persons that are interested in registering for the company’s earnings conference call can do so using this link.

APA (NASDAQ:APA) last released its quarterly earnings data on Tuesday, February 23rd. The company reported ($0.05) earnings per share (EPS) for the quarter, beating the Thomson Reuters’ consensus estimate of ($0.11) by $0.06. APA had a negative return on equity of 48.58% and a negative net margin of 162.10%. The company had revenue of $1.22 billion during the quarter, compared to the consensus estimate of $1.05 billion. On average, analysts expect APA to post $-1 EPS for the current fiscal year and $0 EPS for the next fiscal year.

The firm also recently disclosed a quarterly dividend, which will be paid on Friday, May 21st. Investors of record on Thursday, April 22nd will be paid a $0.025 dividend. The ex-dividend date of this dividend is Wednesday, April 21st. This represents a $0.10 annualized dividend and a dividend yield of 0.49%.

In other APA news, CFO Stephen J. Riney sold 35,000 shares of APA stock in a transaction that occurred on Thursday, March 18th. The shares were sold at an average price of $19.38, for a total transaction of $678,300.00. Following the transaction, the chief financial officer now owns 106,268 shares of the company’s stock, valued at approximately $2,059,473.84. The transaction was disclosed in a legal filing with the SEC, which is available through this link. Also, Director Juliet S. Ellis bought 4,545 shares of the business’s stock in a transaction dated Friday, March 12th. The stock was acquired at an average price of $22.05 per share, for a total transaction of $100,217.25. Following the purchase, the director now directly owns 8,045 shares in the company, valued at $177,392.25. The disclosure for this purchase can be found here. 0.71% of the stock is currently owned by company insiders.

A number of equities research analysts have commented on the company. Mizuho reduced their price target on APA from $23.00 to $21.00 and set a “neutral” rating on the stock in a research report on Tuesday, April 20th. Truist Securities lowered shares of APA from a “buy” rating to a “hold” rating and lowered their price objective for the company from $27.00 to $20.00 in a research note on Tuesday, March 30th. Sanford C. Bernstein restated a “market perform” rating and issued a $20.00 price target on shares of APA in a report on Monday, March 8th. Barclays raised shares of APA from an “equal weight” rating to an “overweight” rating in a research note on Thursday, January 14th. Finally, Citigroup increased their price objective on shares of APA from $16.00 to $21.00 in a research report on Friday, January 15th. One investment analyst has rated the stock with a sell rating, twelve have given a hold rating, eleven have given a buy rating and one has given a strong buy rating to the stock. APA presently has a consensus rating of “Hold” and a consensus price target of $18.66.

APA Corporation, through its subsidiaries, explores for and produces oil and gas properties. It has operations in the United States, Egypt, and the United Kingdom, as well as has exploration activities offshore Suriname. It also operates gathering, processing, and transmission assets in West Texas, as well as holds ownership in four Permian-to-Gulf Coast pipelines. 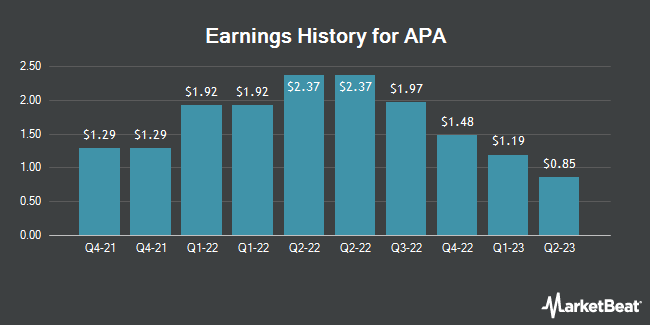 Receive News & Ratings for APA Daily - Enter your email address below to receive a concise daily summary of the latest news and analysts' ratings for APA and related companies with MarketBeat.com's FREE daily email newsletter.

Complete the form below to receive the latest headlines and analysts' recommendations for APA with our free daily email newsletter: