Ritchie Bros. Auctioneers Incorporated (NYSE:RBA) (TSE:RBA) – Equities researchers at William Blair lowered their Q3 2021 earnings per share (EPS) estimates for shares of Ritchie Bros. Auctioneers in a research report issued on Tuesday, May 11th. William Blair analyst L. De. Maria now expects that the business services provider will post earnings of $0.43 per share for the quarter, down from their prior forecast of $0.44.

The firm also recently disclosed a quarterly dividend, which will be paid on Wednesday, June 16th. Stockholders of record on Wednesday, May 26th will be paid a $0.22 dividend. The ex-dividend date is Tuesday, May 25th. This represents a $0.88 dividend on an annualized basis and a dividend yield of 1.39%. Ritchie Bros. Auctioneers’s dividend payout ratio (DPR) is 48.12%. 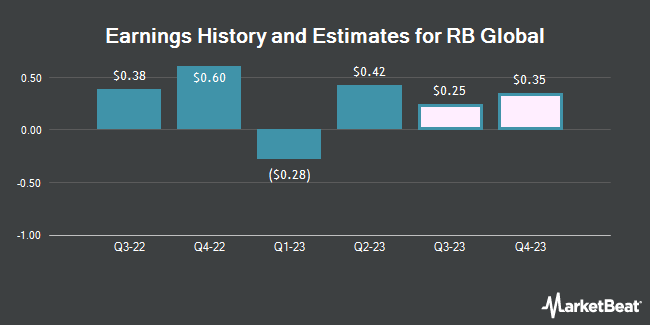 Complete the form below to receive the latest headlines and analysts' recommendations for Ritchie Bros. Auctioneers with our free daily email newsletter: