Zacks Investment Research upgraded shares of ADT (NYSE:ADT) from a strong sell rating to a hold rating in a research note issued to investors on Tuesday morning, Zacks.com reports.

According to Zacks, “ADT Inc. provides security and automation solutions for homes and businesses primarily in the United States and Canada. ADT Inc. is based in BOCA RATON, United States. “

Other equities analysts have also recently issued research reports about the company. TheStreet upgraded ADT from a d+ rating to a c- rating in a report on Wednesday, October 13th. Royal Bank of Canada lowered ADT from an outperform rating to a sector perform rating and cut their target price for the company from $12.00 to $10.00 in a research note on Thursday, January 6th. Finally, Citigroup started coverage on ADT in a research note on Wednesday, January 5th. They issued a buy rating and a $10.25 target price on the stock. One investment analyst has rated the stock with a sell rating, two have issued a hold rating and three have given a buy rating to the company’s stock. According to data from MarketBeat, the company presently has a consensus rating of Hold and a consensus target price of $10.21.

ADT (NYSE:ADT) last announced its earnings results on Tuesday, November 9th. The security and automation business reported ($0.07) EPS for the quarter, missing the consensus estimate of $0.13 by ($0.20). The business had revenue of $1.32 billion for the quarter, compared to the consensus estimate of $1.30 billion. ADT had a negative return on equity of 8.92% and a negative net margin of 7.54%. ADT’s revenue for the quarter was up 1.4% on a year-over-year basis. During the same quarter in the previous year, the company posted ($0.08) EPS. As a group, analysts predict that ADT will post 0.27 earnings per share for the current fiscal year.

The business also recently announced a quarterly dividend, which was paid on Tuesday, January 4th. Shareholders of record on Thursday, December 16th were paid a $0.035 dividend. This represents a $0.14 annualized dividend and a yield of 1.77%. The ex-dividend date was Wednesday, December 15th. ADT’s payout ratio is -29.17%.

Further Reading: What are municipal bonds? 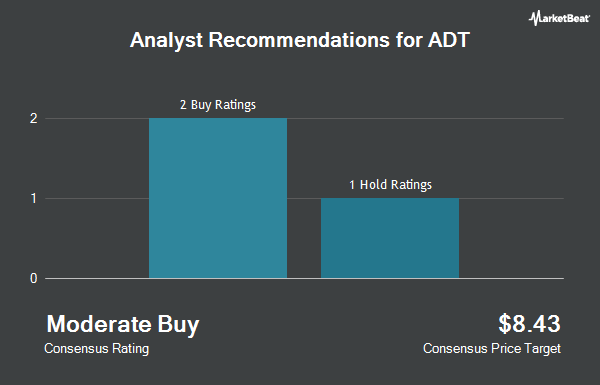 Receive News & Ratings for ADT Daily - Enter your email address below to receive a concise daily summary of the latest news and analysts' ratings for ADT and related companies with MarketBeat.com's FREE daily email newsletter.

Complete the form below to receive the latest headlines and analysts' recommendations for ADT with our free daily email newsletter: