$1.56 Billion in Sales Expected for Avangrid, Inc. (NYSE:AGR) This Quarter

Analysts forecast that Avangrid, Inc. (NYSE:AGR) will post $1.56 billion in sales for the current fiscal quarter, according to Zacks Investment Research. Three analysts have issued estimates for Avangrid’s earnings, with the highest sales estimate coming in at $1.58 billion and the lowest estimate coming in at $1.54 billion. Avangrid posted sales of $1.47 billion during the same quarter last year, which suggests a positive year-over-year growth rate of 6.1%. The company is scheduled to announce its next earnings results on Tuesday, October 19th.

According to Zacks, analysts expect that Avangrid will report full-year sales of $6.66 billion for the current financial year, with estimates ranging from $6.57 billion to $6.81 billion. For the next year, analysts expect that the firm will post sales of $7.28 billion, with estimates ranging from $6.77 billion to $8.38 billion. Zacks Investment Research’s sales averages are a mean average based on a survey of sell-side research analysts that follow Avangrid.

Avangrid (NYSE:AGR) last released its quarterly earnings results on Monday, July 19th. The utilities provider reported $0.35 earnings per share (EPS) for the quarter, missing the Zacks’ consensus estimate of $0.42 by ($0.07). The business had revenue of $1.48 billion during the quarter, compared to the consensus estimate of $1.50 billion. Avangrid had a net margin of 10.41% and a return on equity of 4.54%. The business’s quarterly revenue was up 6.1% compared to the same quarter last year. During the same period in the prior year, the firm earned $0.32 earnings per share.

Several analysts have weighed in on AGR shares. Zacks Investment Research raised Avangrid from a “sell” rating to a “hold” rating in a report on Monday, August 2nd. Mizuho boosted their price objective on Avangrid from $51.00 to $53.00 and gave the stock a “neutral” rating in a report on Tuesday, August 24th. One research analyst has rated the stock with a sell rating, four have issued a hold rating and two have issued a buy rating to the company. According to data from MarketBeat, the stock currently has an average rating of “Hold” and an average price target of $54.33.

The business also recently declared a quarterly dividend, which will be paid on Friday, October 1st. Stockholders of record on Friday, September 3rd will be paid a $0.44 dividend. The ex-dividend date is Thursday, September 2nd. This represents a $1.76 dividend on an annualized basis and a dividend yield of 3.51%. Avangrid’s dividend payout ratio (DPR) is presently 87.13%.

Recommended Story: How Important is Technical Analysis of Stocks 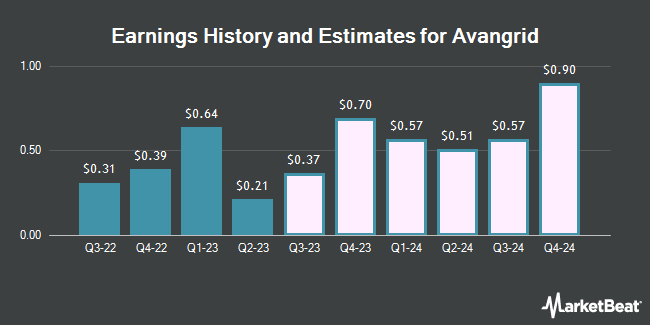 Receive News & Ratings for Avangrid Daily - Enter your email address below to receive a concise daily summary of the latest news and analysts' ratings for Avangrid and related companies with MarketBeat.com's FREE daily email newsletter.

Complete the form below to receive the latest headlines and analysts' recommendations for Avangrid with our free daily email newsletter: