$0.21 Earnings Per Share Expected for The ONE Group Hospitality, Inc. (NASDAQ:STKS) This Quarter

On average, analysts expect that ONE Group Hospitality will report full year earnings of $0.57 per share for the current year, with EPS estimates ranging from $0.54 to $0.60. For the next fiscal year, analysts expect that the business will post earnings of $0.75 per share, with EPS estimates ranging from $0.72 to $0.78. Zacks Investment Research’s earnings per share averages are an average based on a survey of research analysts that cover ONE Group Hospitality.

ONE Group Hospitality (NASDAQ:STKS) last announced its quarterly earnings results on Thursday, November 4th. The restaurant operator reported $0.11 earnings per share for the quarter, missing analysts’ consensus estimates of $0.20 by ($0.09). The company had revenue of $71.87 million during the quarter, compared to the consensus estimate of $70.70 million. ONE Group Hospitality had a net margin of 8.86% and a return on equity of 35.42%. During the same quarter last year, the company earned $0.02 earnings per share.

The ONE Group Hospitality, Inc engages in the development, owning, and management of restaurants and lounges. It operates through the following segments: STK, Kona Grill, ONE Hospitality and Corporate. The STK segment consists of the results of operations from STK restaurant locations, competing in the full-service dining industry, as well as management, license.

Featured Article: Most Volatile Stocks – What Investors Need to Know to Maximize ROI 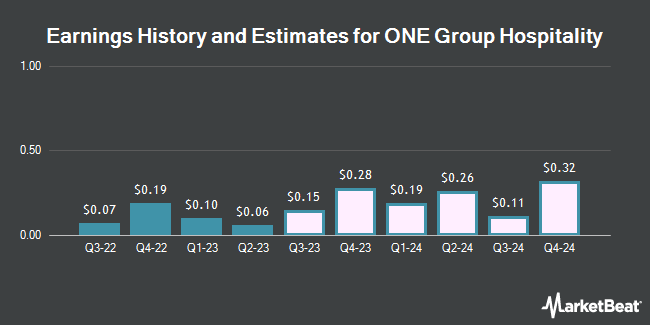 Complete the form below to receive the latest headlines and analysts' recommendations for ONE Group Hospitality with our free daily email newsletter: