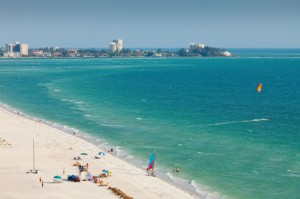 Take heed swimmers 10% of the water samples from lake and coastal beaches in the U.S. failed to meet the safety standards that were set by the United States Environmental Protection Agency, said a new report.

One expert said there could be dangers that are hidden but lurking in many waterways in the U.S. in the form of viruses and bacteria that could cause a host of different illnesses including hepatitis, dysentery, stomach flu, rashes and infections.

Of the nearly 3,500 water samples taken each year at beaches across the country, the beaches in the Great Lakes have a failure rate that is the highest, with very high levels of bacteria, said the EPA.

The finding confirms that pollution in the water caused because of runoff water from storms and sewage overflow remains at many beaches in the U.S.

One expert said the urban slobber that is going untreated into the local waterways is what causes the problems and included in storm runoff waters is trash, chemical animal as well as human waste, oil, bacteria, and viruses.

However, the agency has singled out 35 beaches that are popular and have excellent water quality.

Those beaches met the quality standards 98% of the time during the past five years. They include beaches in Delaware, Florida, Georgia, New Jersey and Massachusetts.

The 17 offenders that continue having serious pollution problems in their waters include beaches in California, Indiana, Maine, New Jersey and New York.

The Great Lakes had 13% of its samples fail the standards of public health, said researchers.

Other regions that have very high bacteria rates in swimming water include the New England coast, the Gulf Coast, the western coast, the New Jersey and New York coasts and the southeast coasts.

States that had the highest rates of failure were Ohio, Alaska and Mississippi.

Over 3.5 million people in the U.S. become sickened each year due to contact with raw sewage overflow said the EPA.

Little children and the elderly are most often the ones that become sickened from water contamination due to immune systems that are weaker.